Southgate shows how to become a true leader

One of the main talking points from the World Cup …

Southgate shows how to become a true leader

One of the main talking points from the World Cup has been Gareth Southgate’s ability to create cohesion and commitment in his squad. So what can business learn from the England Manager’s leadership?

We will probably never know the exact inner workings of the Three Lions’ camp but we can use available accounts of Southgate’s approach to gain an insight into building effective and powerful teams.

The first leadership lesson is Southgate’s commitment to continuous improvement. In a recent BBC interview he said: “The quest for improvement can never stop…”. 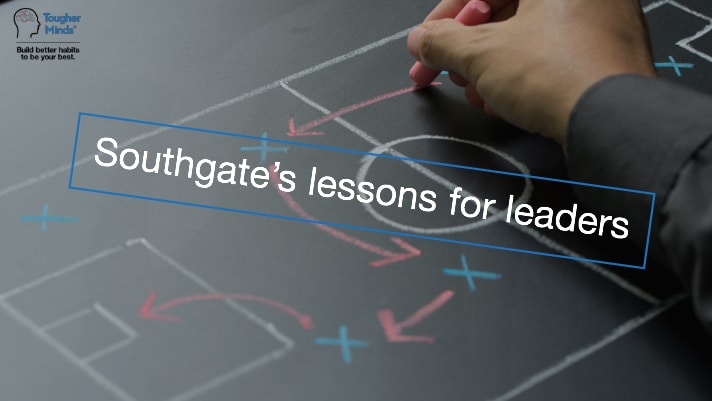 We often hear that some are born to lead, and others are not. Seventeen years in performance psychology, and extensive academic study, tell me this is not the case. We can all improve our leadership because any skill we develop is strongly influenced by what we practice and pay attention to. Our abilities are a combination of nature plus nurture.

To optimise this practice we need a framework to guide our improvement efforts. I use the term Transformational Leadership. This focuses on behaving in a way that positively influences those around us. We can help others to improve themselves in small increments and create new leaders in the process. Through my work with global business and professional sport, including football, I know this approach is powerful and effective. It also helps us highlight some further leadership lessons from the England manager.

We can start with the first of these. Successful leaders must model or display the behaviour they expect from their team. The England manager often mentioned a desire to re-engage with fans and renew respect for the national team. He himself made great efforts to recognise supporters at matches and in his public statements.

He also dealt with media commitments in a helpful, open and energetic manner. The football press corps praised England for their conduct in this area and were even invited to play darts with Harry Kane and Co., at their base on the Baltic. It is clear the example set by Southgate, had a positive effect on his team.

Successful leaders are also Cultural Architects, meaning they design a culture to promote the vital behaviours for organisational and team success. It includes: ensuring team members feel safe and valued; encouraging the team to regularly reflect on strengths and weaknesses; creating big team goals; and, connecting individual roles and responsibilities to those goals.

Many businesses now invest resources to ensure their people feel safe and valued. This is called creating ‘psychological safety’ and it allows people to share vulnerabilities and recognise how they can improve. Southgate clearly created this culture within the England squad.

From his previous role as U21s manager he already established relationships with players including Harry Kane and John Stones, making it easier to build safety. Also, after the tournament in Russia he said the team “learned as much from the defeats as the victories”. So we can be certain he asked this senior squad to carefully reflect on past performances, share vulnerabilities and then plan for future improvements.

England also set themselves clear objectives. Southgate said: “We were aware of a number of landmarks we wanted to hit”. The manager often recognised these milestones in interviews. This would reinforce collective progress and success for his players. It would also help to emphasise how individual roles and responsibilities were helping the team achieve their overarching goals. Throughout the World Cup, football experts often complimented England for the cohesion they showed.

There are many more lessons to take from the England manager’s adherence to effective leadership. Discussion of those are for future columns. I think though that studying a manager like Gareth Southgate and applying these sound and proven principles can benefit any business or organisation, especially in a world were having excellent leaders is crucial for business success.