Tougher Minds has recently completed a successful series of ‘Improving …

The two-week residential event in Leeds, which this year attracted 2,600 new teachers, is valued at £5.5 million over the next two years and is a key element of the national educational charity’s training programme. Teach First is the UK’s biggest graduate recruiter and their Summer Institute aims to share best practice and expertise among those set to work in classrooms, serving disadvantaged communities.

Tougher Minds Director Jon Finn and Consultant Jim McKenna delivered three sessions during the Summer Institute’s Impact Conference, at Leeds Metropolitan University. These were based on the latest neuroscience and the consultancy’s previous successful work with pupils, teachers and parents at schools in England and Wales. 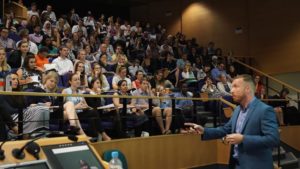 Practical examples of the consultancy’s techniques were also provided by Andrew Foster, who is Head of Academic Performance at Colfe’s in London. Tougher Minds’ programmes have been credited with major improvements in GCSE grades for two consecutive years at the Lewisham based school.

“We were delighted to present the Tougher Minds approach to improving pupil concentration to the delegates at the Teach First Summer Institute”, commented Tougher Minds Director Jon Finn.

“We have previously worked with the organisation at some of their ‘Super Saturday’ CPD events and this was an extension of that activity.”

“They offer support for pupils, teachers and parents and we believe they will be valuable for Teach First teachers as they undertake their important work in many disadvantaged communities”.

Reuben Moore, Teach First’s Director of Leadership said: “We know that the issues effecting the lives of those from disadvantaged communities are vastly complex, resulting in the massive achievement gap that exists between pupils from poorer backgrounds and their wealthier peers.

“As we have seen through our work in schools up and down the country, this gap can be overcome but a holistic approach is necessary – one that encourages emotional traits such as resilience and confidence as much as academic achievement.

“It is incredibly exciting then to see organisations like Tougher Minds running workshops at our largest ever teacher training event at Summer Institute. Based on their expertise and their track record in schools like Colfe’s, the training provided by Tougher Minds and like minded organisations will form a crucial foundation for our teachers’ subsequent in-school training and their understanding of the emotional issues that often underpin the lives of those from disadvantaged communities.”

Tougher Minds training is based on the latest understanding of neuroscience and has been proven to dramatically improve all aspects of school work including learning, homework, concentration, behaviour, exam performance and extra curricular sport.

One of the consultancy’s current client schools, has reported that 50% of its new entrants were attracted because Tougher Minds training was available to pupils and parents. Tougher Minds has worked with schools in the public and private sector. The training is suitable for all ages and year groups, including GCSE and A’ Level students.

For two years running, Tougher Minds programmes have generated average grade improvements among GCSE pupils which equate to moving from B to A and A*s . This improvement is on average almost 50 per cent better than those pupils who did not complete the Tougher Minds training programme.

You can also check out this Tougher Minds podcast recorded during the Teach First event.