Character Education – are the critics correct?

The opening line of an article in Friday’s London Evening …

Character Education – are the critics correct?

The opening line of an article in Friday’s London Evening Standard defiantly stated: “Teaching children grit and resilience is a waste of time and will not help them perform better at school.”

It was an opinion attributed to genetics expert, Professor Robert Plomin, taken from a longer feature in that week’s Times Educational Supplement. The Standard article went on to quote him as saying:

“Growth mindset is greatly overplayed. If you try to tell your kids who have trouble learning, ‘you can do it, you can change,’ you can actually do great harm.
“Change these kids’ mindsets and they’re all going to go to Oxbridge. That’s nuts.” 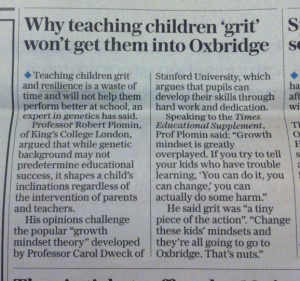 The article, which appeared in London’s Evening Standard on Friday 13th November 2015.

My initial reaction was to think it likely that Professor Plomin had been quoted out of context; but I also felt compelled to address some of the ideas associated with these type of theories and I have set out my reflections below.

1) Carol Dweck’s theory of Mindset is used as the principal exemplar of grit and resilience by the TES piece, yet her work is far from the sole representative of the approach. Therefore to suggest that grit and resilience is a waste of time on this basis is not valid.

2) I regard grit and resilience as being underpinned by self-control, which might also be described as emotional regulation and attentional control. Some of the world’s most prominent experts in psychology share this view. These include Professor Walter Mischel, Professor Roy Baumeister and Professor Richard Davidson. You can also read more about my views, and their work, here.

3) Having the belief that you can change, if you learn from failures, and keep persisting – i.e. having a growth mindset – is just one component in the dynamics of being resilient. It is an important one though.

4) Good resilience programmes for education do not simply tell pupils that they can change, and magically expect them to. Robust training of this type teaches young people simple and practical skills that allow them to improve the way they concentrate in class, and during private study; build better sleep, diet and exercise habits; boost their learning by teaching them how to use more efficient and effective learning techniques, and deal with setbacks more effectively by teaching them how to regulate their confidence. Further, good programmes also understand the important role of deliberate practice in achieving sustained change.

5) Carol Dweck has never suggested that if you help a young person to develop a growth mindset they will be catapulted into the academic stratosphere. Broadly speaking, she only claims that improvements will be relative to the individual and that developing a growth mindset will make improving current levels of performance more likely than if one maintained a fixed mindset.

6) Dweck’s work is about developing environments that help young people to learn from failure, and to keep persisting. It is not solely about telling children that, “You can do it, you can change.” That is only one thin slice of the intervention.

I agree with Professor Plomin that character education is often presented as being ‘magic’, especially the idea of mindset. In fact this is far from the truth. Change requires hard work (which is a lot of deliberate practice according to Professor Anders Ericsson’s research), and is difficult to achieve. However, this does not make grit and resilience education or teaching children how to develop a growth mindset, and improve self-regulation a waste of time.

For those interested in further exploring the supporting evidence for character education, I would point you towards Walter Mischel’s latest book, “The Marshmallow Test: Understanding self-control and how to master it”. Mischel is arguably the most influential psychologist in the 20th and 21st century.

Mischel, W. (2014). The Marshmallow Test: Understanding self-control and how to master it. London: Bantam Press.