Make character and resilience “an integral part” of all education

Helping pupils to build character and resilience should become “an …

Make character and resilience “an integral part” of all education

Helping pupils to build character and resilience should become “an integral part” of all education, in all schools. That is the view of Tougher Minds Director Jon Finn, who was a co-organiser of tonight’s “Developing resilient minds in education” conference, which aimed to raise awareness of fostering these key attributes in young people. 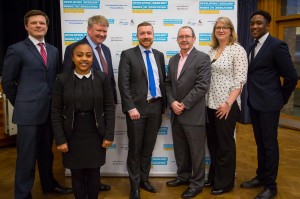 Tougher Minds Director Jon Finn (centre) with Prof. Jim McKenna, Andrew Foster and Head Richard Russell from Colfe’s plus two of the school’s pupils and Alice Dunn from Teach First at the start of the Developing resident minds conference.

The event attracted more than 250 delegates from across London and the South-East – including representatives from Eton College and St Paul’s Girls’ School – and from as far afield as Glasgow and Taunton. It was jointly hosted by Colfe’s (in Lee near Lewisham) and the Tougher Minds performance consultancy.

Colfe’s recent record-breaking exam performance is attributed to Tougher Minds’ Personal Brain Management (PBM) programme, which was also voted 2014 Education initiative of the year, at the Independent School Awards. During the conference delegates heard more about the PBM programme, the neuroscience underpinning it and how it is being implemented successfully inside the classroom and out.

The conference’s themes are already being embraced by the Department of Education, which recently invited Jon Finn to a round-table discussion chaired by Secretary of State Nicky Morgan. The Department also created a series of “building character” awards to recognise schools’ efforts in this rapidly developing area.

“Rather it should be an integral part of how pupils are able to manage themselves every day and thus perform to their very best.

“We have developed some highly effective approaches for teaching young people to independently deploy the self-control they need to be successful in education and life and how to show resilience in paying attention to the important academic subjects they are presented with.” 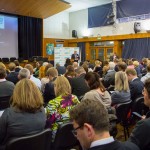 Finn added: “We wanted to show the power and effectiveness of our programmes to leaders in all sectors of education ,as well as other related approaches.


“We have seen a significant positive impact on pupils from Tougher Minds work, so we felt we had something very valuable to share, given the growing interest in character and resilience in education at the moment.”

Colfe’s School Headmaster Richard Russell also said: “Colfe’s is the only independent school making active use of this approach, which has been developed in the field of competitive sport. The fact that it is grounded in science gives it added credibility.

“The result is a learning culture within the school which is much more clearly focussed on the needs of pupils. We are particularly interested in developing ways in which pupils can build personal resilience through engagement with the Tougher Minds programme: over time, this will help them to make good choices and decisions, as well as to excel at GCSE and A Level.” 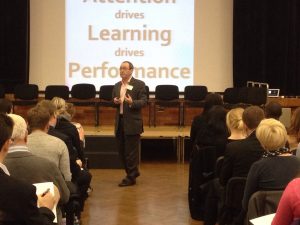 The Tougher Minds PBM programme is based on the latest understanding of human brain function and how that leads to practical techniques for improving emotional regulation and key mental attributes for learning such as resilience. The conference outlined these ideas, and how they can be practically implemented in schools.


Other speakers at the conference included Professor Jim McKenna – a world expert in behaviour change from Leeds Beckett University – and Matthew Syed, the former Olympian, a Commonwealth gold medallist and author of ‘Bounce – The Myth of Talent and the Power of Practice’.

Pupils and parents from Colfe’s also shared their experiences and explain how that has transformed into an everyday practice for them.

If you feel Tougher Minds can help you or your organisation, or if you would like to know more about our performance programmes for education or business, please contact us today.