Motivation and confidence in your life and work

Tougher Minds Head of Education, Andrew Foster, is also a …

Motivation and confidence in your life and work

Tougher Minds Head of Education, Andrew Foster, is also a regular teacher of history, as part of his role at Colfe’s School. In his first Blog of 2016, he uses a significant moment, prior to the second World War, to illustrate the point that we should see great achievement and value in our everyday endeavours, even when the outcomes are not totally perfect.

Eight trains reached London. One did not.

Sir Nicholas Winton, whose long life came to an end in midway through last year, never forgot the two hundred and fifty children that were to be on that ‘Kinder transport’ train from Prague, prevented from travelling by the German invasion of Poland. Dubbed the British Schindler by former Chief Rabbi Lord Jonathan Sacks, like his German counterpart he agonised over those that he had not been able to help.

“If it had gone a day earlier they would have been saved. It was an awful feeling.”

I deliberately choose an historically important and intensely serious subject matter to illustrate a point that applies to all aspects of our daily lives and work, no matter the importance. We will fail. We will fall short. And that failure will stay with us. 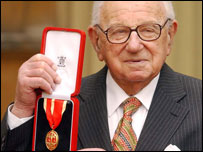 Sir Nicholas Winton – his work to save Jewish children from the Nazis was not entirely successful. Yet his great humanitarian achievement can help to show that whilst our personal endeavours might not have a perfect outcome, they are all still worthy of merit.

Sir Nicholas’ efforts to arrange transport, foster care and where necessary avoidance of border regulations and controls resulted in 669 children coming to Britain. There are an estimated six thousand descendants who owe their lives to this remarkable achievement by a 29 year old stockbroker who would have faced no censure or even notice had he not involved himself in their families’ plight.

But could he have saved more? Yes, the likelihood is he could. His work was not perfect. But there are six thousand people immensely grateful that something was done, imperfect though it may have been.

We have a tendency to characterise pretty much all we see as either poor or perfect. Listen to others and indeed yourself when discussing things that matter to you. Notice how shades of grey rapidly become blacks and whites. “No good at maths”; “born linguist”; “incredibly motivated”; “absolutely hopeless”.
This mode of thinking demotivates, destroys confidence, breaks concentration. We need a better way.

Thinking of a yawning chasm between poor and perfect, a Grand Canyon which one either clears or plummets into when trying to improve, is incredibly unhelpful to one’s chances of making improvement. That is why Tougher Minds are developing the concept of a “P2 Continuum” – a sliding scale from poor to perfect that exists for every thing of value we try to achieve with our lives.

Progress up the continuum may be slow, non-linear, replete with false dawns and setbacks. However, every last bit of that progress is worth being made, by definition.

Our own daily endeavours may seem mundane in comparison to Sir Nicholas’ act of humanitarian heroism. Who cares about whether we make it to the gym, improve our diet, save £50 extra per month against the enormities of three-quarters of a century ago? I can tell you who – the bride whose father is alive to walk her down the aisle, the spouse or partner with whom a long and happy retirement can be shared. That these are not immediately apparent, and may not be for decades, does not make them less real. Many will give up on their New Year resolutions before February, disconsolate that they have not reached perfection, unaware that they were edging in its direction. The continuum needs their attention but all they see is the canyon.

Remember that a great part of Sir Nicholas’ work was utterly mundane – form-filling, correspondence. And had one observed him throughout the course of it, one could not have noticed the difference between the effort that he put in and one that was 5% less effortful, efficient and effective. Yet lives hung on the difference. Had he thrown his hands up at any point, saying “this is hopeless”, he could have been forgiven. But the effects on 669 lives, and the rest, would have been catastrophic.

The beginning of a new year is an appropriate time to remember the achievements of those that we have lost in the twelve months just past. Sir Nicholas will be long-remembered because of all that he did. In 2016, let us all push as hard and as far up that P2 continuum, for all that it does for ourselves and others, no matter how big or how small.