The programme – which is credited with a 50% increase in GCSE grades in the last 18-months and was included in a recent fact-finding discussion, chaired by Secretary of State Nicky Morgan – was nominated alongside hundreds of other schools, departments and individuals across 12 categories. The winners were announced last night (13 Nov) at a ceremony in Nottingham, attended by leading independent schools from throughout the UK.

Tougher Minds Director Jon Finn commented: “We are delighted that the hard work, application and dedication of the pupils, staff and parents at Colfe’s has been recognised by this award, alongside the effectiveness of the Personal Brain Management programme.

“The PBM is based on the latest understanding of neuroscience and has the potential to deliver significant benefits including improvements in grades, pupil recruitment, learning, homework, concentration, classroom behaviour, exam performance and extra curricular sport. We look forward to continuing our work.”

“The Tougher Minds programme is unique to Colfe’s and we have all been inspired by the enthusiasm and commitment of the teachers who have introduced it, particularly Andrew Foster.”, commented Headteacher Richard Russell.

“Our next step is to embed the approach in the learning culture of the school and to share it with our partner schools in the state sector.” 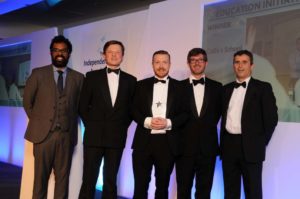 Tougher Minds and Colfe’s wins the Education Initiative of the Year.

And Colfe’s School Head of Academic performance Andrew Foster explained more about the Personal Brain Management programme. “The Tougher Minds programme enjoys more parental support than we have witnessed in respect of any school initiative.

“We have also seen that teachers who embraced the philosophy of the programme and adopted its techniques are improving their own practice.”

Foster continued: ”It has been shown that over 150 parents, considering Colfe’s as a potential school for their children in Year seven, have repeatedly identified Tougher Minds as the distinctive feature which attracted them to us , with more than half mentioned it without prompting.”

Tougher Minds Director Jon Finn, Consultant Jim McKenna and Colfe’s staff have been working to improve performances since 2012 in partnership with pupils and parents. The project is centred around practical techniques, based on the latest understanding of neuroscience, which help develop key mental attributes such as motivation, confidence, concentration and resilience.

The PBM training has been proven to increase grades, improve learning habits and enhance personal performances. In the last 18-months there has been a 50% improvement in GCSE grades for pupils involved in the Tougher Minds training programmes. 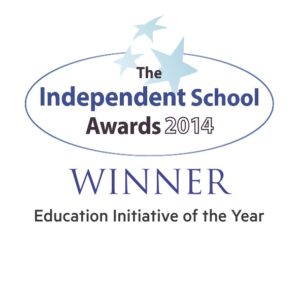 During the 2013-14 cycle of the PBM at Colfe’s, every Year 11 pupil received six weekly sessions of group training in the Autumn term, followed by fortnightly sessions during Spring Term. Parents were also invited to train for five weekly sessions and over 100 opted to participate.

Students were also issued with a personalised “Tougher Minds/Colfe’s Performance Planner”, in which they set targets and reflected positively on their daily achievements.

In addition to improvements in GCSE results, in respect of A*/A grades, Colfe’s retention of  6th Form pupils has also improved this year. The ISA awards are intended to showcase and celebrate excellence in the fee-paying sector across the UK.